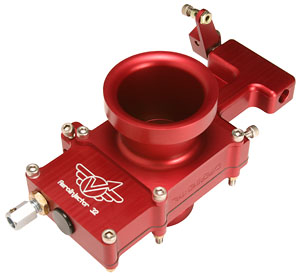 Fuel Burn and the AeroCarb[AeroInjector]-equipped Jabiru 3300
July 16, 2004: by Kerry Fores

I’ve been flight testing my AeroCarb[now called AeroInjector]-equipped, conventional gear, Jabiru 3300-powered Sonex since February of this year. Of course the first few hours were flown to prove everything is working as it should (including the pilot) and that the engine could be trusted out of gliding distance of the airport. After my third flight, which was an entire hour spent at full throttle circling the airport to break the engine in, I was comfortable and ventured away from the airport to expand my flight testing program. As I continued to log hours, I was consciously, but unscientifically, tracking my fuel usage. Almost from the beginning I was surprised by my numbers, which were nothing more than quick mental calculations every time the fuel truck drove away. “Let’s see, 12.9 gallons divided by 2.9 hours…carry the 2…..just over 4 gallons per hour. Hmmmm, sounds low to me.”  And so it went.

A  few weeks ago I flew 3.0 hours continuously while flying airspeed calibration triangles. A triangular course was flown in 10 mph increments from 40 mph indicated all the way up to 170 mph indicated. I ended the flight with a few touch and goes, taxied back to the Sonex hangar, and called the fuel truck. The math was simple this time; 12.9 gallons topped off the 17.2 gallon tank, 3 hours were flown….4.3 gallons per hour! Admittedly not much fuel is burned at 40 mph, but 170 mph will gulp some gas – or will it?

With my Hobbs nearing the magic 40 hours, and with visions of flying longer cross-countries soon, I needed to satisfy my curiosity and do some scientific fuel consumption test flights. My first scenario was a cross country which would balance my desire for ground-covering speed with my desire to have a reasonable fuel burn rate. For this flight I chose to fly with numbers Tony Spicer often quotes for his flights between North Carolina and Florida or Wisconsin: 2850 RPM at 5000 ft. I topped off the tank and began my flight. The climb-out was done at full throttle and  approximately 110 mph until I reach a pressure altitude of 5000 MSL. Throttling back to 2850 RPM I had a calibrated airspeed of 152 MPH. I kept my RPM and altitude steady while flying both north and south through my practice area for 2.3 hours with the engine leaned out to a peak EGT of 1340 degrees. I was also careful to note the OAT so I could calculate my TAS. I landed, taxied back, and called the fuel truck. The tank needed only 10.9 gallons to bring it back to the top, and the calculator showed a fuel burn rate of 4.74 GPH. I pulled out my E6B and calculated a TAS of 162 MPH. That’s affordable cross-country performance!

My next flight scenario flown later that day was a “low and slow” scenic flight. For this flight my plan was to fly a steady 2400 RPM (Jabiru list 2300 RPM as 75% power for the 3300), at an altitude of about 1000 feet AGL (1800 MSL). Unlike the last flight, this flight wasn’t meant to get me anywhere in particular, but was meant to be a fun flight at a constant RPM – a Sunday cruise, if you will. During this flight I loosely flew the circumference of my 30-mile test radius. Occasionally something would catch my eye and I’d do a 360 degree turn to take a closer look, and a few boats presented tempting targets for strafing, so by no means was this flight a steady straight line at a constant altitude. My altitude varied from about 800 MSL to 2300 MSL, but I left the throttle alone, gaining RPM in the dives and loosing it in the following climb, but always seeing it return to 2400 RPM. Again, I was leaned out to a peak EGT as near 1375 as I could maintain without going over, and I recorded the OAT. I performed 4 touch and goes upon arrival back at Oshkosh and recorded 2.7 hours for the flight. Once again the fuel truck was called and as he drove away I calculated a fuel burn rate of only 3.61 GPH for that flight. The airspeed worked out to a CAS of 126 MPH and a TAS of 130 MPH. Remember, this is with 120 HP on tap.

The final flight scenario was a high-altitude “I just wanna get there” flight. With full fuel on board I climbed at full throttle to a pressure altitude of 9000 feet MSL. There I leveled off, throttled back to 3100 rpm, and leaned to an EGT of 1260 (as close to 1375 as I could get on this flight without going over). I recorded the OAT and began to patrol my flight test area for Focke Wolfs. It’s worth noting here that a Jabiru 3300 equipped with an AeroCarb and  a Sonex-recommended propeller will turn just over 3300 RPM in level flight at wide-open throttle. The power curve in the Jabiru manual identifies 3300 RPM as 120 HP. My flight ended with a cruise descent to landing 2.1 hours after take-off. And the numbers? 12.8 gallons used for a fuel burn rate of 6.1 GPH and a TAS of 181 MPH.

Here’s one more scenario for you which wasn’t meant as a fuel burn flight, but really illustrates the economy of flying with an AeroCarb-equipped Jabiru 3300.  With my flight time nearly flown off I took off with full fuel to practice landings on runways smaller than Oshkosh offers, and also explore handling characteristics nearer gross weight. The flight included at climb to 4200 AGL, as series of stalls, touch and goes (a total of 11) at three different airports, a full stop landing with shut-down at another airport, some “formation flying” with a few local boaters, and two 170+ MPH runs down on the deck to avoid the anti-aircraft batteries on the lake bluffs above me. Cruise speeds, when I actually held it straight and level, were at 2400 rpm and 130 MPH TAS, around 1000 ft AGL, with the engine leaned to 1340 degrees. I flew for 3.2 hours on 13.7 gallons of fuel and had one heck of great time for only 4.3 gallons per hour.

With these numbers you can run your own scenarios: A Saturday lunch run to your favorite burger joint. A Sunday fly-in breakfast. A weekend 800 miles away. A coast to coast flight just because you can.  Whatever your flying desire is, the AeroCarb undoubtedly makes it economical.

We at Sonex always welcome our customer’s own experiences and flight data. If you have perfomed your own fuel burn calculations with any of the factory supported engines, whether equipped with an AeroCarb or not, please feel free to forward it to us so we may add it to our knowledge base. Please note that such data should be carefully collected and all pertinent data supplied with your numbers.

Learn More About the AeroInjector!