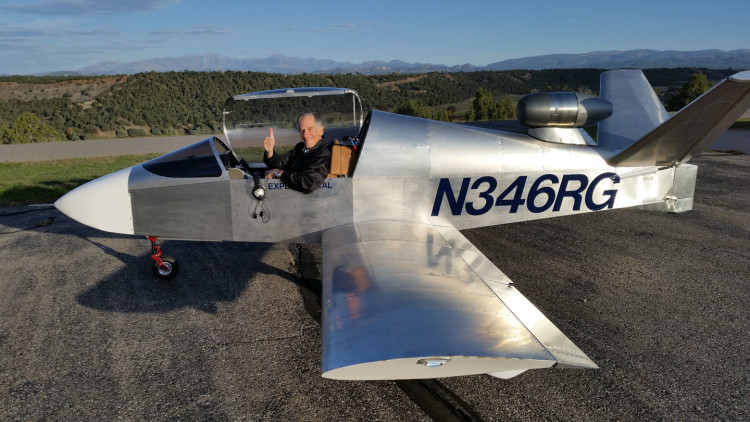 Congratulations to Redge Greenberg of Durango, Colorado, who made the first flight of SubSonex serial number JSX0003 yesterday, October 15th: the first customer-built SubSonex Personal Jet to fly! “I flew the SubSonex this morning, for about 35 minutes… all went well,” writes Redge. “My regards to Dwight Tolfer who was a big help for me during the construction project that was done almost entirely in my garage.”

Redge received the first SubSonex kit delivery in February, 2015, an Ultra-Quick-Build kit with optional Triton Trailer (see our February 16th Press Release). The SubSonex is sold as a Quick Build Kit only, leaving very little work for the customer, and providing almost everything needed to fly with the exception of avionics and paint! Two Quick Build Kit versions are offered: an EAB-compliant kit for the traditional builder including pre-built wings, fuselage and canopy; and an Experimental Exhibition category Ultra- Quick Build Kit with no “51 percent rule” restrictions.The Ultra-Quick Build customer will install the easily-removable outboard wing panels, engine and fuel system, bolt-in the retractable landing gear, install avionics, electrical systems and controls, install the supplied BRS, fiberglass components and upholstery, and add paint.

“I hold commercial glider, helicopter & single engine land licenses, accumulating 4500+ hours in numerous aircraft,” wrote Greenberg for our February press release, “but I never got the chance to fly a jet. I first saw the prototype of the SubSonex at Oshkosh, and followed the development for over a year. When Sonex offered the jet as a kit, I was first in line. Like my RV8, the SubSonex is aerobatic, but the Sonex company also included a ballistic parachute for extra safety.”

Gold Wings are on the way to Redge!