Jim Ballenger and Pete Pearson: A Tale of Two Sonexes

Sonex builders Jim Ballenger and Pete Pearson flew their Sonex Aircraft for the first time on the same day. Read Pete’s brief account of two friends building and flying together below:

A Tale of Two Sonexes

Jim started this adventure by purchasing his Sonex plans before we had ever discussed these sweet little birds. The more I looked at the Sonex the better I liked it and the plans were the best I had ever seen. So, one very cold February weekend in 2007 Jim, his sweet wife and I blasted off for Oshkosh and the Sonex Workshop. I wasn’t sure that the Sonex was going to be a good fit for me so I decided the workshop was the perfect chance to try one on for size. As soon as I crawled out of the Sonex cabin demonstrator I went straight inside and told Betty that I was sold and purchased the plans. After having attended the workshop and studying the plans for two weeks Jim I both decided to take the plunge and order the kit. Jim opted to build his Sonex with a Jabiru 2200 that he already had on hand. Much to my beautiful wife’s dismay I decide to sell our Tomahawk and use the money from it to purchase a Jabiru 3300. Hey, never had an airplane with too much power I said.

Our kits arrived on May 6, 2007 and the fun began. Jim and I spent many hours comparing notes and building experiences over the next two years. I might add that Jim and I live in the same area and are members of EAA chapter 339 and have hangars at the same airport. In late May 2009 my Sonex was inspected and received its airworthiness certificate. Jim was moving along rapidly behind me so I decided to press forward with polishing and other minor things as Jim was finishing his Sonex. In August Jim’s Sonex was inspected and passed with flying colors.

Then came the taxi testing and the last minute flight prep. With taxi testing compete we agreed that we would wait for the perfect conditions for the first flight. At last the morning of Sep 12, 2009 dawned bright, clear and calm. Shortly after 7 AM two new Sonexs took to the air for the first time. This is how two friends in one EAA chapter at the same airport built and finally flew their Sonexes for the first time on the same day. 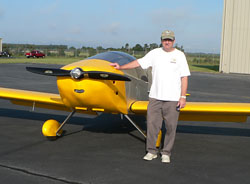 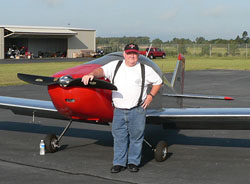