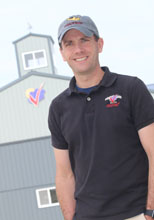 Congratulations to Cris Nash who celebrates his 2-year employment anniversary at Sonex Aircraft, LLC this month! Cris joined us in May of 2016 as a part-time airframe assembly mechanic while attending Fox Valley Technical College. After graduation with his avionics technician degree we added Cris to our full-time staff as our Quick Build Department Lead Mechanic, and Cris is currently working on finishing his A&P licenses.

Read more about Cris, and the rest of the Sonex Aircraft Team!