“Sloshkosh” Part 2? Not Quite! AirVenture 2019 Turned Into a Great Week! 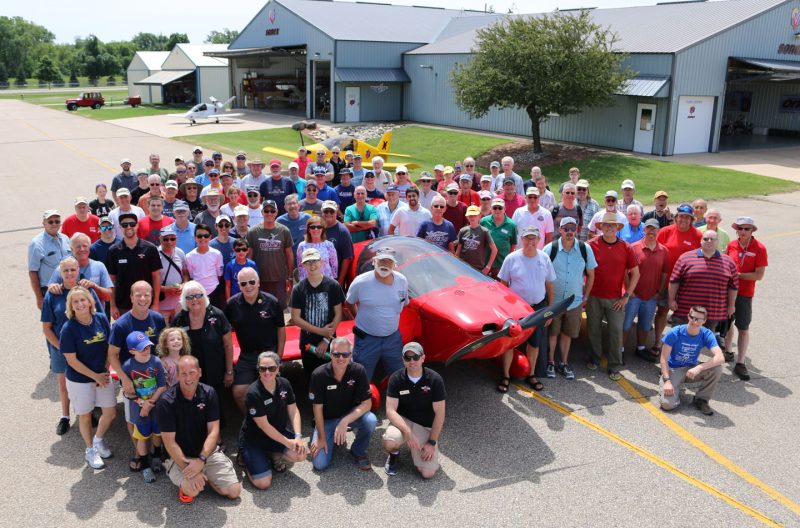 The days preceeding EAA AirVenture Oshkosh 2019 yielded record rainfalls, bringing back nightmares of “Sloshkosh” back in 2010. Arrivals were shut-down for anyone that didn’t have guaranteed hard-surface parking, and many aircraft parking areas and camp sites at AirVenture were closed days into the show. Beautiful, mild weather arrived in-time for the Sonex Aircraft Open House and Homecoming Fly-In, however, and Oshkosh 2019 turned into a great show!

The Sunday Open house included only a few customer aircraft due to the arrival restrictions, but well-over 200 current & prospective builders turned-up at Sonex Factory Headquarters throughout the event. The Sonex Open House is always great opportunity for current and prospective builders too network, meet Sonex staff, and tour the Sonex factory.

During the Open House, Sonex Aircraft announced that Kit Reservation Deposits are now being accepted for the 2-place SubSonex JSX-2T! The new jet design attracted much interest throughout the week of AirVenture, and several deposits have been submitted. Stay tuned as future progress updates of the JSX-2T project will be coming soon!

In other SubSonex news, Kitplanes Magazine Editor at Large Paul Dye brought his beautiful SubSonex Personal Jet to Oshkosh, flying it all-the-way from his home in Carson Nevada – by far the longest cross-country trip ever flown in the SubSonex. Of course, the flight was not non-stop! Dye’s jet, named “Loki” by Paul and his wife, was displayed in the the Homebuilders Hangar throughout the week, and was featured in a Homebuilts in Review presentation on Friday. At the end of the week, “Loki” was awarded a plaque for Outstanding Workmanship by the AirVenture aircraft judging committee. Congratulations to Paul!

The Society of Experimental Test Pilots awarded their Spirit of Flight Award to the new EAA Flight Test Manual (FTM). Originally authored by the EAA Homebuilt Aircraft Council, Sonex Aircraft is proud to have served on the EAA Safety Committee working group that brought the publication to the finish line for publication. The FTM and its flight test data cards offers a comprehensive flight test program for EAB aircraft that provides detailed instruction on planning specific tests, how to fly them, and what to do with the data when it has been obtained. The Spirit of Flight Award is usually given to individuals (Sonex Founder John Monnett won the award in 2013), but this year’s award went to the EAA HAC and countless other volunteers that have worked on the FTM over the years to bring this valuable, safety enhancing resource to the homeubilt community.

Sonex Aircraft offered factory tours again this year during AirVenture, just one more benefit of our “home field advantage!” The tours were well attended throughout the week, and our special thanks goes-out to the EAA Welcome Wagon volunteers for helping attendees with transportation from AirVenture grounds to the Sonex factory and back.

Sonex had its first experience in the all-new and improved Homebult Aircraft Display area on AirVenture grounds, and it was great! All kit aircraft vendors have been moved further South on show grounds, closer to show-center in a well-organized community adjacent to EAA Homebuilt HQ, the Homebuilders Hangar and the new Homebuilts in Review stage. We are now easier to find and closer to the action, and enjoyed increased booth traffic throughout the week!

As-always, our very special thanks to Bob and Laurie Carlton of Vertigo Airshows! Bob flew our factory prototype SubSonex Personal Jet through his outstanding airshow routine now in its fifth season of shows! Bob performed both his daytime aerobatic SubSonex Act, and his Fire & Lights night pyro show during both AirVenture night shows.