AeroConversions Products in the News:

Please note that links on older archive pages are often not active. These pages serve purely as an informational archive. If you have trouble obtaining the information you need from this site, please email the webmaster with your questions. 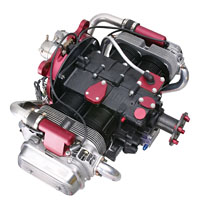 AeroConversions products have been featured in two recent articles. In the April, 2007 issue of Kitplanes magazine, contributing editor Tim Kern features the AeroVee engine in his monthly Engine Beat column: “AeroVee: grandson of the VW, and a highly refined conversion.” Kern reviews the history of VW conversions and the AeroVee, lists the AeroVee’s advantages over the competition and explains why the engine dominates the VW conversion market. Kern also got a “scoop” on the release of AeroVee 2.0, with the April, 2007 edition of Kitplaneshitting mailboxes just days before our formal announcement.

AeroCarb customer Owen MacPherson wrote an article featured in the January-February 2007 issue of Recreational Flyer, the official magazine of theRecreational Aircraft Association Canada. The article features the AeroCarb, clarifying many of the common concerns about slide-type carburators, highlighting the unit’s simple and reliable operation, and MacPherson’s great satisfaction w

ith the AeroCarb, which has over 300 hours flown over 5 years on his VW conversion. The article also features two sidebars. One is an interview with Sonex Aircraft, LLC founder and President John Monnett discussing the AeroCarb and the future of the AeroConversions product line. The other sidebar features customer Gerry Younger, and his positive experience flying the AeroCarb on his 0-200 powered aerobatic clip wing Cub, which is equipped with inverted fuel and oil systems.